In case you missed it – Here’s a recap of results from some of our Falcons sports teams from the week of 3/11/19. Want your team highlighted on the athletic website? Send sports scores, game summaries, and photos to webmaster.fosterabc@gmail.com. 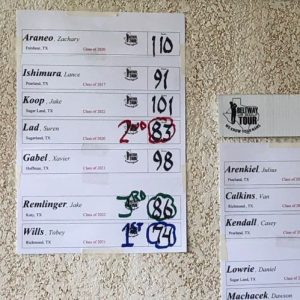 District Champs! They got the big WIN over a good Manvel squad! Scoring goals were Jasmin Badillo and Angelica Bochus! Huge shout out to the defense led by Elise Cheramie! Grace Shivers with another shut out in goal! 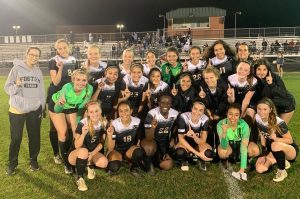 Peyton Welker was perfect on the mound on Tuesday to lead Foster past Fort Bend Willowridge 21-0. Welker struck out #20 to end the game. Foster secured the victory thanks to 11 runs in the second inning. Cici Mata, Kylie Stamper, Alyssa Muceus, Amanda Allen, Alexis Morin, and Shelby Showers each drove in runs during the inning. Mata, Stamper, Muceus, Allen, Morin, and Showers each had RBIs in the frame. Welker led things off in the circle for Foster. She allowed zero hits and zero runs over three innings, striking out eight and walking zero. Foster racked up eight hits in the game. Muceus, Mata, and Sierra Toman all managed multiple hits for Foster. Toman, Mata, and Muceus each collected two hits to lead Foster. Foster didn’t commit a single error in the field. Emily Naivar had five chances in the field, the most on the team. Foster stole six bases during the game as two players stole more than one. Caroline O’Driscoll led the way with two.

It came down to the wire on Thursday, with Foster taking victory on a dramatic walk-off fielder’s choice in the late innings that sealed their victory over Manvel. The game was tied at three with Foster batting in the bottom of the eleventh when #1 induced Kylie Neel to hit into a fielder’s choice, but one run scored. Foster knotted the game up at three in the bottom of the tenth inning, when Alyssa Muceus singled on a 0-2 count, scoring one run. Amanda Allen was in the circle for Foster. She lasted 11 innings, allowing ten hits and three runs while striking out four. Foster tallied nine hits. Shelby Showers and Cici Mata both had two hits to lead Foster.

Foster asserted their will over Fort Bend Marshall on their way to an easy 12-1 victory. Foster got things started in the first inning. Cade Sitka drove in two when he doubled. Foster put up five runs in the third inning. The offensive firepower by Foster was led by Reece Burke, Chance Van Cleave, Zach Schroeder, and Joseph Aventurado, all knocking in runs in the inning. Cade Lubojasky took the win for Foster. He lasted two and a third innings, allowing zero hits and one run while striking out two. Brandon Naivar threw two and two-thirds innings in relief out of the bullpen. Sitka went 2-for-3 at the plate to lead Foster in hits. Foster didn’t commit a single error in the field. Sitka had the most chances in the field with 11.

Jackson Schwank had all the right stuff on Friday for Foster, allowing zero runs and besting Brazosport by a score of 10-0. Foster secured the victory thanks to seven runs in the second inning. Foster’s offense in the inning came from walks by Christian Martinez and Nick Mota, singles by Chance Van Cleave and Reece Burke, and an error on a ball put in play by Carson Smith. Schwank earned the win for Foster. He surrendered zero runs on four hits over five innings, striking out five. Chase Albright led Foster with two hits in three at bats. Foster didn’t commit a single error in the field. Cade Sitka had five chances in the field, the most on the team.

Cade Sitka was brilliant on the mound on Saturday, as he threw a no-hitter to lead Foster past Fort Bend Marshall 20-0. Foster secured the victory thanks to 12 runs in the second inning. Foster batters contributing to the big inning included Audin Sanchez, D.J. Harris, Reece Burke, Joseph Guerra, Sanchez, and Joseph Aventurado, all knocking in runs in the inning. Foster got things started in the first inning when an error scored one run. Foster scored 12 runs in the second inning. The offensive onslaught came from an error on a ball put in play by Harris and Aventurado, a walk by Sanchez, a single by Burke, a home run by Sanchez, and a double by Guerra. Sitka earned the victory on the hill for Foster. He went five innings, allowing zero runs on zero hits, striking out 14 and walking zero. Foster socked one home run on the day. Sanchez went deep in the second inning. Foster tallied nine hits in the game. Guerra and Chase Albright all managed multiple hits for Foster. Albright and Guerra each collected two hits to lead Foster Falcons Varsity. Foster Falcons Varsity didn’t commit a single error in the field. Sanchez had the most chances in the field with 14.